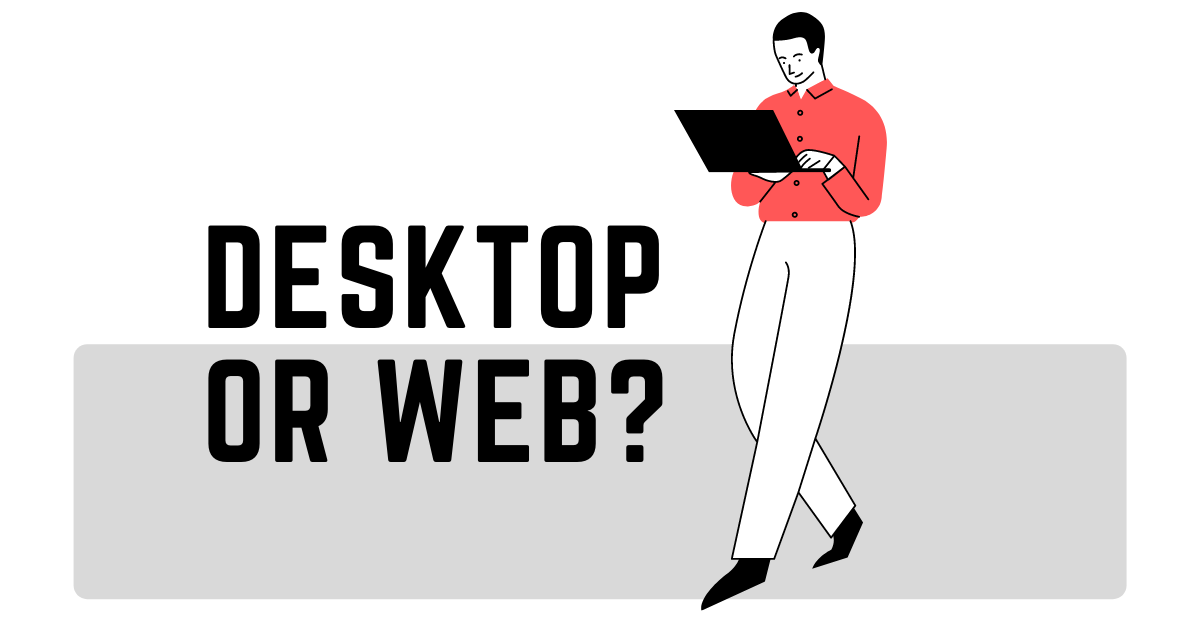 Webapp vs Desktop, Which is Better for you?

For the past decade, the trend has been to stray away from desktop development and into web and mobile apps. But more recently the desktop app may return as more people are working from home.

Before you decide on creating your master vision leading to a world-changing app, decide on the delivery platform. The next big thing could be based on a variety of platforms. Maybe it's a mobile app, web app, or desktops like Windows and Mac. Each platform comes with its pros and cons. This falls into two categories, device-based and device agnostic. Desktops and mobile apps are device-dependent, while the web app is device agnostic.

In this article, we're looking at the possible rise of desktop apps. Around 85% of people use desktops. It's safe to assume that desktop apps are here to stay, at least for now.

The desktop app has seen a rise in the number of downloads over mobile apps, especially after the launch of Windows 10, Microsoft's most versatile operating system for PCs and laptops. This can be attributed to several factors, from improved support from developers to the ease of distribution.

Desktop apps bring a host of benefits for both customers and developers. Customers can make a one-time payment without worrying about subscriptions or ads. The application becomes a permanent fixture on their device, unlike mobile apps where you have to download them again after every few updates because your phone memory is full.

Developers benefit from a relatively easy coding environment, as well as being able to monetize through paid downloads and creating recurring revenue by using a freemium model.

Another factor is that they are faster than mobile apps which take two or three seconds to load on most devices. Desktop apps don't have this problem since they're native to the operating system, unlike mobile apps which run on a virtual machine.

Desktop apps also avoid the problem of 'app overload.' Users are now reaching app fatigue due to too many notifications and alerts from different applications. The average user has over 100 apps installed on their phone. They can't spend quality time with all these apps, so they open the ones they use most. After all, why download an app you'll never use?

Desktop apps focus on one task at a time. These are easy to navigate and don't take up much space as mobile apps do. Mobile devices now support larger screens ranging from 5 inches to 6.

WHEN DID WE START LEAVING DESKTOPS?

People use their smartphones for messaging, social media updates, browsing the web, streaming music, and videos, etc. This means they won't need to rely on large screens to view websites or watch videos. A smartphone can easily accommodate all these tasks.

There are several reasons why desktops aren't becoming obsolete, one is the rise of web apps and streaming services like Netflix. You can watch movies on your televisions using video game consoles like Playstation, Xbox, or Apple TV.

Another reason is that desktops are used to create content not just consume it. If you want to be a writer or blogger, you'll need a desktop. Desktop apps allow for greater customization and functionality than mobile apps. They're also easier to use.

With desktops, data stays on the local machine. In case of an internet or power outage, the data is secure. Some desktops can even work without an internet connection. From a user perspective, an offline app could be an important aspect, which can synchronize online when the connection is available.

The initial costs of development and infrastructure are far less demanding for desktop apps. Most importantly the burden of 100,000 concurrent users is not on a server but distributed across the spectrum of user desktops. Desktops yield far greater storage, speed, and features than a remote server when compared to costs.

I think we will see a rise in desktop apps due to their level of engagement and user satisfaction. We may even see a resurgence of laptops and desktops as the demand for mobile devices declines. Phones are just that, phones. Using them beyond that capacity is pushing the limits. We may also see more and more projects which initially may have started as web apps start as desktop apps.